MEMOIRS
OF
WILLIAM BECKFORD
OF FONTHILL,
AUTHOR OF "VATHEK."

IT was naturally to be expected that before this time some remembrances of one of the most remarkable men of his day would have appeared in an authentic shape. Every hour after the death of the individual carries into oblivion some trait of character or peculiarity which distinguished him from other men. Delay in such cases is dangerous. "If," said a distinguished writer, "a lite be delayed until interest and envy are at all end, we may hope for impartiality, but must expect little intelligence; for the incidents which give excellence to biography are of a volatile and evanescent kind, such as soon escape the memory, and are rarely transmitted by tradition."

The subject of the notices which have been here condensed into a memoir was a public character both as regarded literature and the arts. His history was a striking and singular one; his abilities were of the first order, his taste un- [unpaginated pagebreak] questioned. Nothing up to this time has been done to preserve the scanty portions of the materials of that history from oblivion; it cannot, therefore, be deemed uninteresting to present to the public all the information it is likely to receive regarding a name so celebrated.

In carrying out his object, the Editor has to confess obligations to several individuals, some of whom are distinguished names in literature and art, well acquainted with Mr. Beckford. He must claim indulgence upon some points that were beyond his control to render in a fuller manner, which would have increased in consequence that interest of which he still flatters himself there will be discovered no small amount and, at the same time, to crave it farther for any faults which rested with himself, and the somewhat disjointed nature of his materials. Should the information imparted in these pages be what the Editor has fair reason to expect, of no small amount of general interest, he will not fail to feel both gratified and honoured.


[Note on this edition: This online edition (of which chapters will appear as they are scanned and proofed on an irregular basis) is © Dick Claésson. Many thanks for invaluable proofing of the text to Stephanie Mikes. Please report any errors and suggestions to Dick Claésson.] 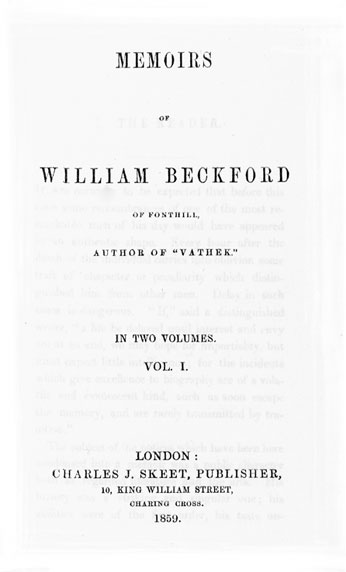