The Natural and Artificial Wonders of the United Kingdom: With Engravings, in three volumes.
Vol. II. England and Wales.

This most splendid of all structures was erected by Mr. Beckford, and has lately been sold to Mr. Farquhar.

Before giving a regular description of the edifice, we shall take some notice of the grounds which are happily formed by nature, and improved by art, into such a variety of mazy and deceptive paths, that it is scarcely possible to retrace the way without a guide: the circum- [322] ference of the enclosure measures about seven miles, defended by a stone wall and cheveaux-de-frise.

Fonthill Abbey is distant from Salisbury about eighteeen miles, and may be approached through the village of Fonthill Bishop, or by Fonthill Gifford. Immediately on entering the gate, the road ascends through a dark wood of firs, remarkable for their lofty growth, to a path leading eastward of the mansion, up the hard walk, or Hinkley Hill. In grounds so varied, it was found absolutely necessary to give a particular appellation to some principal points, as without this expedient, it would have been difficult to direct any one to a particular spot. This path is skirted with laurel, and enclosed by matted underwood: at intervals, the Abbey Tower appears on the left, among the trees. After traversing the distance of about half a mile, the forest lawn presents itself, and, turning to the left, the nut lawn presents itself, so called on account of the variety and abundance of hazels: here are likewise to be seen American and exotic oaks in great perfection. Directly in front of this walk, at some distance, is the Beacon, a very lofty wooded height, which we shall have occasion to notice as we proceed. The way continued about a quarter of a mile, leads to the clerk's walk, which, on the left, passes the western front of the Abbey. A narrow mossy alley on the right, closely shaded, conducts to a path bordered by the scarlet thorn, and extending more than a mile, presents, during spring and summer, a beautiful and fascinating [323] display of flowers of spontaneous growth, of luxuriant shrubs and variegated hollies.

The parts above described, are on the north side of the Abbey. Inclining to the north-west, we enter another path, called the Nine-miles-walk, being part of a journey of twenty-two miles, which may be made within the grounds, without retracing our steps; on each side are broad spaces covered with flowers, which appear to be cultivated with peculiar care. Enclosed by large forest trees, the way may be pursued in a winding course to the summit of the great avenue; having attained the eminence, as we turn to the east, the Abbey bursts upon the view in solemn and imposing majesty. This point is the north-western extremity of the grounds, whence a folding gate opens into the public road; crossing which, another gate leads to the terrace, a woody ridge, that extends about five miles from west to east. Continuing along the western boundary, the prospect ranges over a country extensive and delightfully diversified. Among the most prominent objects, are Alfred's Tower, and part of the grounds at Stourhead, the seat of Sir Richard Hoare, Bart. Ascending the new terrace southward, the ground upon the right is an abrupt steep, crowned with large trees of various species: on the left is a deep woody bottom, called Bitham Wood. Turning out of this path, at an acute angle to the left, and pursuing the walk through a narrow passage in the wood, we arrive at the Beacon, one of the loftiest points in the whole sweep of hills, for which this part of the country is remarkable. On the summit of this hill [324] a plain, of about five or six acres, crowned with a magnificent tower of considerable extent; it is of triangular form, having a circular bastion at each of its angles, and being over-grown with shrubs and moss in a very picturesque manner. Declining towards the south-east, near the Beacon, a most interesting prospect is suddenly and agreeably presented. Over a long extent of ground, varied by gentle undulations, and studded with clumps of trees, displaying a rich assemblage of glowing and luxuriant tints, appears the Abbey, forming a grand mass of embattled towers, surrounded by the lofty octagon which composes the centre. This enchanting scenery is backed by an elevated woodland of a sombre aspect, which by contrast heightens the striking and brilliant effect of the edifice. Descending into the bottom, a fine pellucid lake reflects the surrounding beauties of the place; in some parts of unfathomable depth, and having the appearance of the crater of an ancient volcano, stretching and meandering, so as to give an idea of even much greater magnitude than it possesses. The lake is plentifully supplied with wild-fowl, and the woodcock has fequently [sic] chosen this sequestered valley for her nest. As shooting is not permitted within the enclosure, every animal sports undisturbed; and conscious of security, the hares will feed at the horse's feet from the hands of the rider, and frequently associate in great numbers within a few paces of the windows. Passing through a sheltered walk, bordered on one side with the hardiest produce of the English and Mediterranean heaths, the American plantation is seen, [325] broken into picturesque forms by the margin of the water. This plantation is principally made on the declivity of a large knoll, and exhibits every variety of the magnolia, azalia, and rhododendron hitherto imported. Here is a pleasing view of the Abbey. In a direction south-east, there is a romantic hollow made still more interesting by the works that are here erected for supplying the Abbey with water.

The Abbey. - This building, which designed by the late Mr. Wyatt aided by the knowledged taste of Mr. Beckford, consists of three grand leading features, conjoined by the galleries and the cloisters. In the centre is the great hall and principal tower; towards the north are two large square towers, which are balanced at the other extremity, or southern end, by a group of varied edifices, with embattled parapets.
The front of the hall presents a door, thirty-five feet high, adorned with crockets, and a highly wrought finial. On the top of the pediment is a niche, contaning a statue of St. Anthony of Padua, surmounted by a cross-flory, the arms of William, the first Lord Latimer, from whom Mr. Beckford is lineally descended. The great tower, which is 270 feet in height, is seen rising between four pediments, whose projection form the two stories of apartments around the octagon. Directly under the tower, appears the western cloister, behind which is a square paved court, having in its centre a fountain, that plays into a large marble basin. Between two octangular towers, south of the cloister, is an oriel of two stories, attached to [326] the brown parlour below, and yellow damask room above; the tower on the north side of the oriel contains various apartments; that on the south, is a staircase to this part of the building.

On the south side of the building is a richly ornamented cloister of five pointed arches, their outer mouldings terminated by heads beautifully wrought; answering to each of the arches, are the parlour windows, their upper compartments filled with delicate tracery and painted glass.

From the square tower, towards the east, projects the south oriel, forming the extremity of the long gallery, which measures 330 feet; the upper part of this window is of stained glass, representing the four Fathers of the Church; the lower part, like most of the windows throughout the building, is of the finest plateglass, of uncommon size; below the window, is a pointed door leading to the lobby of the parlour. On the eastern side of the abbey, is an oriel richly carved, containing shields with armorial bearings, and other devices; the window is ornamented with the figures of St. Columba, St. Etheldreda, Venerable Bede, and Roger Bacon, in stained glass, by Eginton. - On this side are three square towers, which form the principal features.

The interior is fitted up with the greatest magnificence, but most of the furniture having been sold we shall not attempt any farther description. 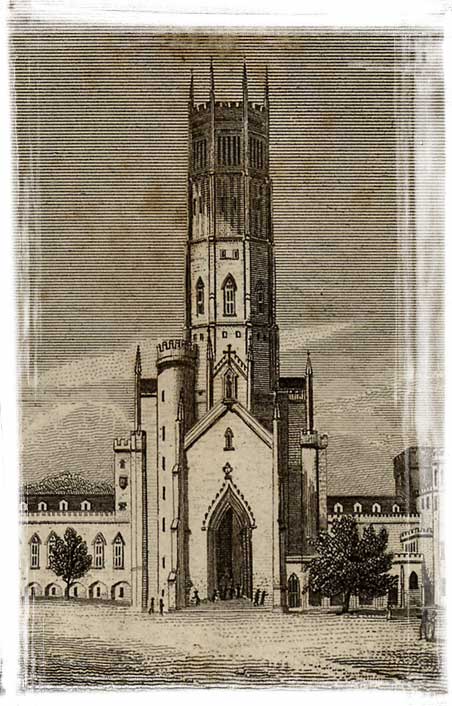 Engraving, detail. [Click the image for a full-scale version of this print].